A number of events took place in 2017 to celebrate 200 years since the raising of the Regiment. The four articles which follow are taken from the 2018 Journal and describe the main events:

Below both Durbar articles, a gallery of extra photographs of the event have been included.

A fifth article shows the Regiment’s bicentenary birthday cake at tea after our AGM in June 2017. 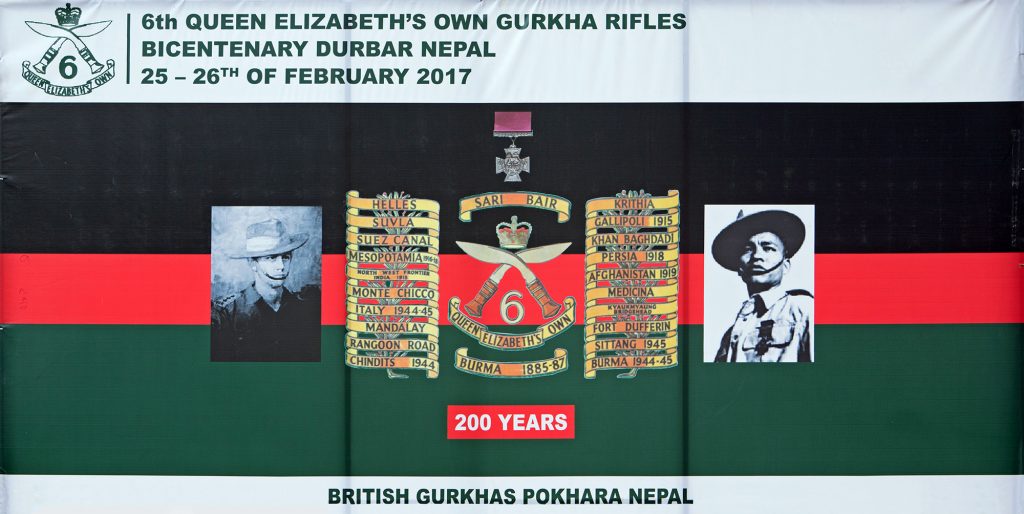 During the 2013 Durbar gathering people were very enthusiastic and overjoyed at seeing long lost friends in the quiet and serene environment of BGP Camp. During the bhela I happened to overhear Brian talking with one of his old sathis about the possibilities of a further Durbar. The idea began to grow and pretty soon began to take root. By the end of 2014 the seeds for the 2017 Durbar began to germinate.

The first couple of meetings took place at Gurkha Haven Hotel after which we were able to select a working Durbar Committee. Our meetings entailed committee members travelling from all over Nepal every time a meeting was held. Quite a few were on active GWS service and we had to ensure that the meetings were scheduled on Saturdays to ensure the participation of those on GWS service. The following were finally selected as the Durbar Working Committee:
END_OF_DOCUMENT_TOKEN_TO_BE_REPLACED 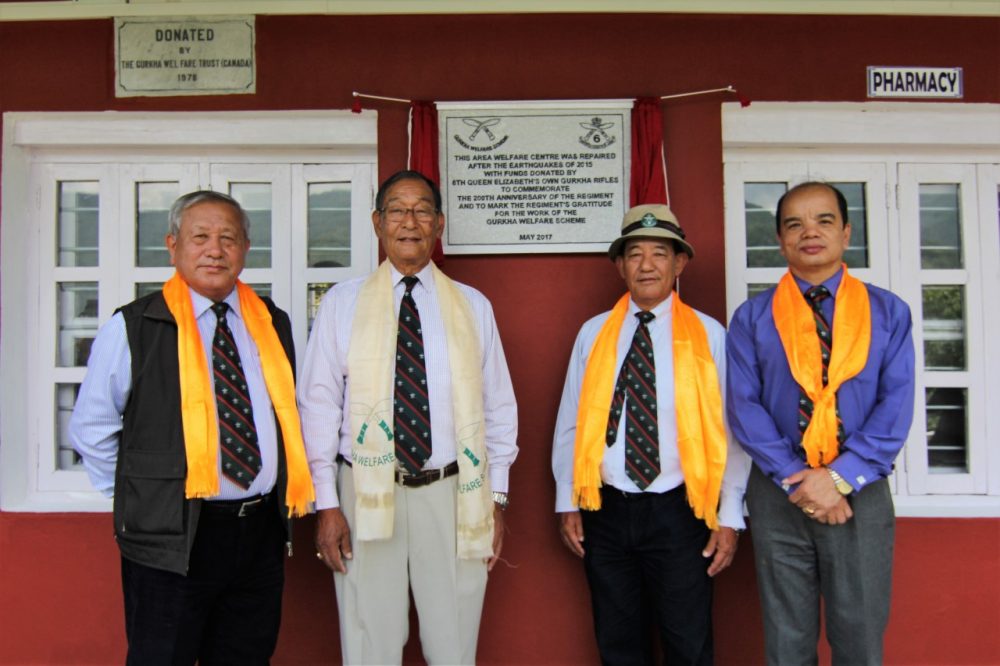 Gyan Saheb, Gopal, Bhuwansing and Purna Sahebs at the inauguration of the repaired Lamjung AWC

The devastating earthquake of 2015 affected Nepal badly and some of our Area Welfare Centres were also affected. It was also the 200th year celebration of Gurkha Service to the crown. Following the saying of “strike whilst the iron is hot” the President of The Regimental Association, Brigadier John Anderson OBE, wrote a short paper on how we could assist. He presented three possible options:

1. Option 1: Create a cell where our ex-Gurkhas could report and seek help. This was discarded as AWCs are already in existence and would need to create a separate cell in Nepal particularly for this.

2. Option 2: Assist with the education of ex-6th Gurkha Children. This would be a continuing commitment and would also need a cell in Nepal to select candidates.

3. Option 3: Assist in repairing and retrofitting the AWCs in Gorkha and Lamjung which were affected by the earthquake.
END_OF_DOCUMENT_TOKEN_TO_BE_REPLACED

The Gurkha Everest Expedition 2017 was the culmination of a five-year journey for the Brigade of Gurkhas.
On 15 and 16 of May 2017, 13 members of the Brigade stood on the summit of Mount Everest, the first serving Gurkhas ever to do so. In turn, it is also the most successful mountaineering expedition on Everest in some time, having fixed ropes to the summit for the first time by non-Sherpas, achieved a 100% summit success from the summit team and returned all members without any serious injuries. It is also the start of something bigger and more enduring; the Gurkha Exploration and Mountaineering Society (GEMS) will be launched shortly, providing more opportunities for Adventurous Training to members of the Brigade and more remarkable achievements by Gurkha soldiers. 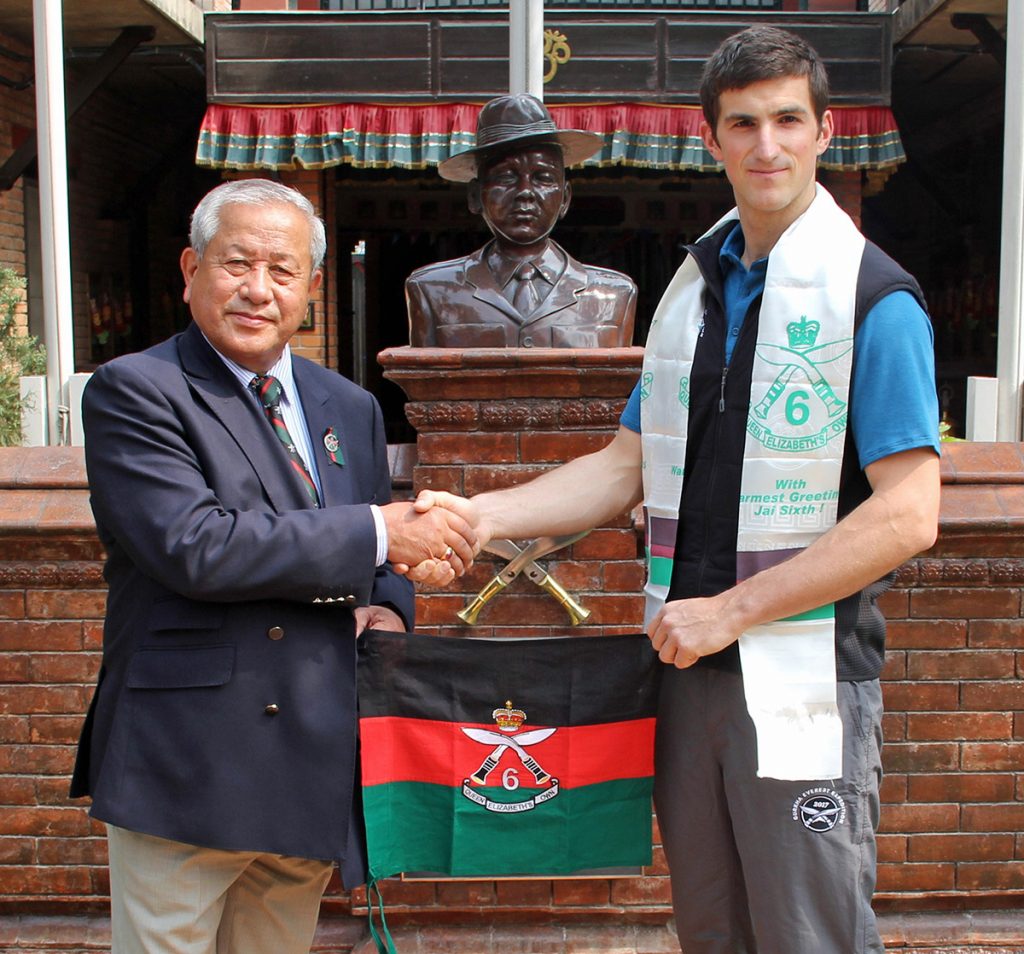 I was in Khandbari drinking tongba (in the middle of the day, I admit) when the first earthquake hit in April 2015, certainly nowhere near the dramas experienced by the Everest team who were at Camp 1 (6,000 m) at the time. Their tale has been well publicised and is an extraordinary one, but better told elsewhere (see The Journal No. 96). The first interaction I had with the team was some weeks later in Kathmandu, when I had the pleasure of meeting a group of shaken, but robust, mountaineers who had a story to tell and a mission to finish. So, after some good fortune and a few training events in Scotland I made it to the start line of the 2017 expedition in a supporting role along with another Lieutenant from 2 RGR, Liam Smith. Both of us had a good deal of climbing experience, but Himalayan peaks were a completely new endeavour for both of us. We approached the expedition with an open mind as to summit ambitions, and focused on supporting the team goal of getting a serving Gurkha soldier to the summit of Mount Everest.

It was, through and through, a truly memorable experience, partly due to the climbing but mostly due to the team. Our trek into Base Camp, a 14-day journey through the best of the Khumbu valley, was a real pleasure despite the occasional bouts of headaches from the altitude. Inevitably, the younger soldiers would race off ahead in the morning, and several times through the day we would come to a small crowd of locals surrounding our Gurkha climbers spinning tales or playing songs. We were, certainly, a team that differed from the usual fare that is seen trying to scale Everest as part of commercial expeditions. We had a warm relationship with our Sherpas and created a genuine atmosphere of trust extremely quickly.

END_OF_DOCUMENT_TOKEN_TO_BE_REPLACED

In a moment of madness at the 6 GRRA Committee meeting in September 2016, I volunteered to run the 6 GR 200th Anniversary celebrations in the UK. Having attended a number of large 6 GR gatherings before and seen the efficient way that Major Khusiman Gurung organised the All Ranks Reunion in Farnborough, I thought, “It can’t be that difficult.”
I started getting concerned when I was drawn in to sort out the commemorative badges (sourcing ribbons, cutting to size, attaching the badge and putting them in boxes) followed shortly afterwards by sorting out the collection and distribution of the Commemorative Brochures, which, by the way remains “work in progress.” This was all before a Warning Order had been issued about the 200th Anniversary celebrations in Kempton Park. My dilemma was putting out an instruction too early and getting members confused about the Nepal event with the UK one. I decided to delay issuing instructions until after the three-day event in Pokhara.

Having organised the move of an Armoured Brigade out of Iraq by air and sea, I thought Kempton Park wasn’t going to that difficult! When I got to Pokhara for the 200th Anniversary celebrations there, my blood pressure started to rise. The programme that Major Gopal Gurung and his team had produced was absolutely amazing. The detailed planning and organisation that had gone in to it was obvious even before you arrived at the main gate of British Gurkhas Pokhara.
END_OF_DOCUMENT_TOKEN_TO_BE_REPLACED

As in recent years, our Annual Reunion and AGM was held alongside the GBA Annual Reunion at the RMA Sandhurst. Because Old College was  being used for for a course passing-out that day, after the service in the Academy’s Memorial Chapel we walked to New College for the GBA pre-lunch drinks and lunch.

The 6 GR table at the lunch

As soon as Chairman GBA had finished his post-lunch speech the twenty-four of us on the 6 GR table escaped upstairs to hold our AGM. This was followed by tea and our ‘Reunion’ in another ante-room. Being our 200th Anniversary this was rather special. Mani had arranged an excellent 200th birthday cake. Helen Hickey, our senior member present, was invited to blow out the candles and cut the cake with a smart kothimora kukri. Brigadier John Anderson, our President, then presented 200th Anniversary badges to Helen and Carol Horsford, as widows of former distinguished officers, plus one or two other former officers.