In a moment of madness at the 6 GRRA Committee meeting in September 2016, I volunteered to run the 6 GR 200th Anniversary celebrations in the UK. Having attended a number of large 6 GR gatherings before and seen the efficient way that Major Khusiman Gurung organised the All Ranks Reunion in Farnborough, I thought, “It can’t be that difficult.”
I started getting concerned when I was drawn in to sort out the commemorative badges (sourcing ribbons, cutting to size, attaching the badge and putting them in boxes) followed shortly afterwards by sorting out the collection and distribution of the Commemorative Brochures, which, by the way remains “work in progress.” This was all before a Warning Order had been issued about the 200th Anniversary celebrations in Kempton Park. My dilemma was putting out an instruction too early and getting members confused about the Nepal event with the UK one. I decided to delay issuing instructions until after the three-day event in Pokhara.

Having organised the move of an Armoured Brigade out of Iraq by air and sea, I thought Kempton Park wasn’t going to that difficult! When I got to Pokhara for the 200th Anniversary celebrations there, my blood pressure started to rise. The programme that Major Gopal Gurung and his team had produced was absolutely amazing. The detailed planning and organisation that had gone in to it was obvious even before you arrived at the main gate of British Gurkhas Pokhara.

On return to the UK, I quickly organised our first planning meeting. It soon became apparent that organising this event was going to be more difficult than I initially envisaged. All my committee members had jobs which included shift work, which made getting everyone together a serious challenge. With each planning meeting “The Plan” slowly came together. The biggest test was identifying the number of people attending. I am deeply indebted to the 6 GRRA Trustees who approved my request for additional funding, primarily for transport costs, which I believe was crucial to the success of the event.

The decision to provide free transport proved to be a game changer. We had estimated an attendance figure of 600, but when we sold 500 tickets at the GBA Bhela alone we became more optimistic. In the end a total 1650 tickets were sold. The £10 “ticket” provided each person with a badge (6 GR Members only), brochure, sun hat, a two-course lunch and entertainment. The biggest attraction was the opportunity to meet old friends and comrades. On the bright sunny morning of 29 July 2017 the Plan was in place. There were still a few small groups working frantically sorting out the decorations before the first “Guests” arrived, but we were ready! 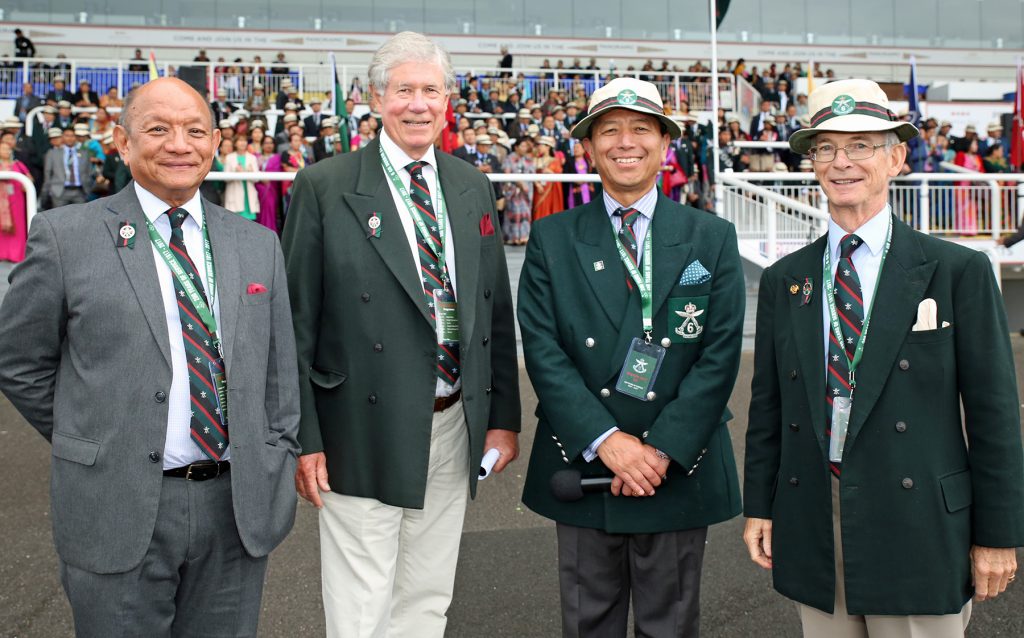 On arrival, all attendees were presented with a sun hat and a 200th Anniversary Brochure before they entered the main hall where food, entertainment and more importantly old friends were waiting for them. After the inevitable mad scramble for the “goodies” and “Tipan Tapan” the proceedings began. The President, Brigadier John Anderson OBE, and Chairman, Lt Colonel Brian O’Bree, welcomed everyone to the event and thanked the event organisers for their hard work. This was followed by an address by the Nepalese Ambassador, His Excellency Dr. Durga Bahadur Subedi, who emphasised the need to maintain the strong bond between Britain and Nepal. After the speeches a few presentations were made to Members of the Committee and others. 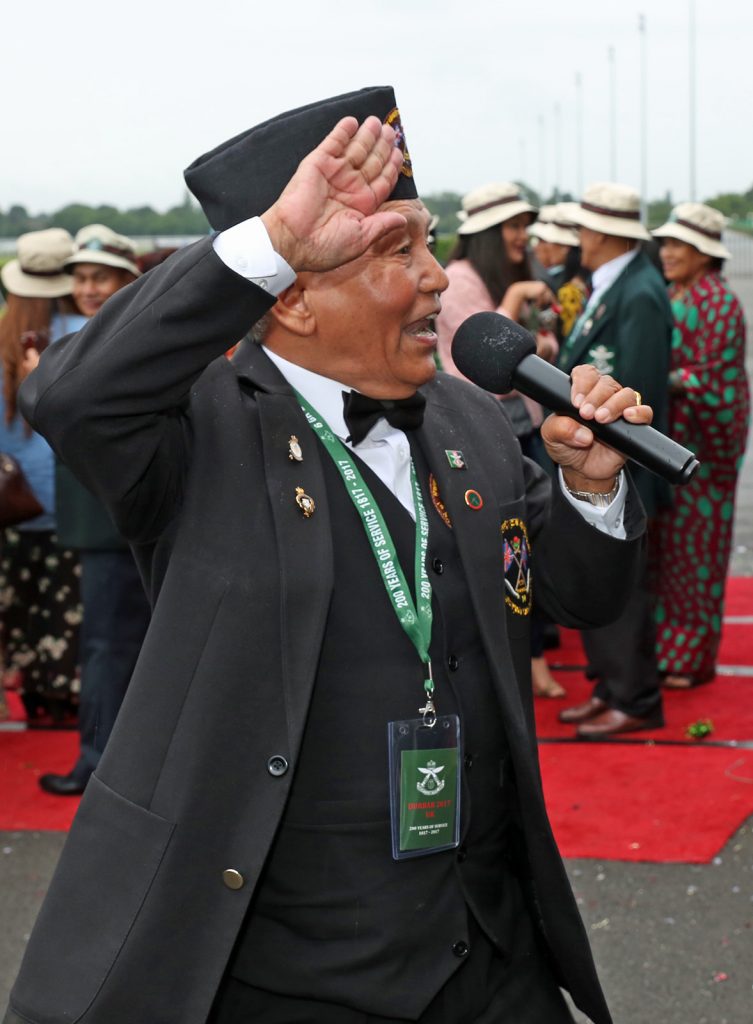 As the drinks flowed, old comrades reminisced about the good old days in Malaya, Brunei, Hong Kong and Church Crookham. The hot humid days on exercise in Lantau, field firing at Castle Peak ranges and mosquito infested ambush positions on the Border were recounted and relived as if they had taken place only a few weeks ago. The wives renewed old acquaintances and talked about the Family Lines in Tam Mei, Burma Lines and Queen’s Hill Camps. The hubbub of conversations in the Main Hall was punctuated by the sound of the Nepalese Cultural Band, amongst whom was our own Captain Birbahadur Thapa (Biru) – still going strong at over 70. The Gurkha Museum display of 6 GR’s heritage items was well received but what seemed to attract people was the Gurkha memorabilia on sale. Gavin Edgerley-Harris, The Director, said that “business was brisk” – well done and thank you, Gavin.

The 200th Anniversary historical video produced by James Herbert, played on the huge screen in front of the main stands, as well on the many TV screens through out the hall. Instead of thundering hoofs and brightly attired jockeys the screens showed the crack and thump of artillery, mortars and small arms fire following the footsteps of our forbearers as they made history and added to our battle honours. After the historical video the Nepalese Dancers took to the stage. The light drizzle did little to dampen the spirit of the dancers and even less so of those who joined in the “Khusiko Nautch”. Work, the rain, the cold and age related aches and pains were all forgotten as mature gentlemen swayed and stomped to the beat of the madal and Nepali songs. 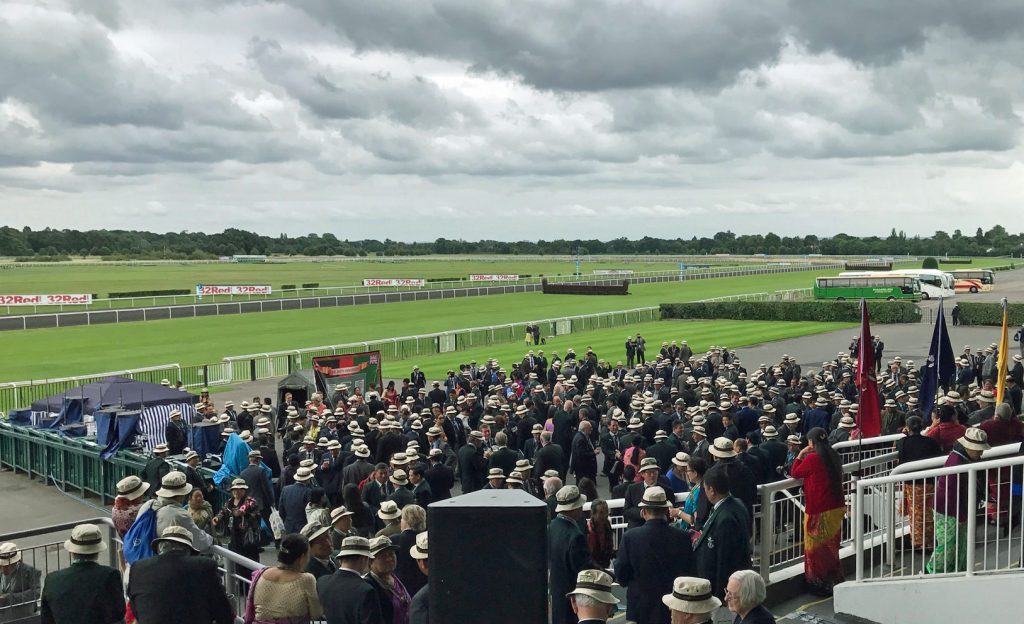 On the racecourse – waiting to receive 200th Anniversary Commemorative Badges

The highlight of the event was the presentation of 6 GR 200th Anniversary commemorative badges. Past 6 GR Commanding Officers, manned the presentation points as members of 6 GR proudly marched forward to receive their badges. The badge is a reminder not only of their service in 6 GR, but also of friends they made and shared experiences.

For the finale, the Piper, who having played in the main hall, led everyone out on to the stands for the closing event. The Chairman thanked everyone for attending and the Committee for all their hard work in making the event such a success. As the sun began to fade and the drizzle became heavier, the 6 GR flag was slowly lowered to the sound of Last Post being played by the Bugler.

It was hard work and I could not have done it without the tireless efforts of Major Khusiman Gurung and the other members of the Committee – Thank you to them all.

Some more photos of the day ..

Scroll over to view description and click on image to enlarge.

Once enlarged, to see next or last, click the arrows in the image or use your keyboard right and left arrows. 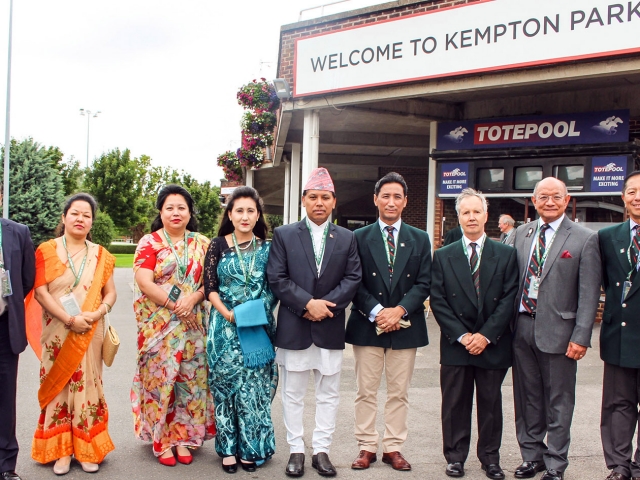 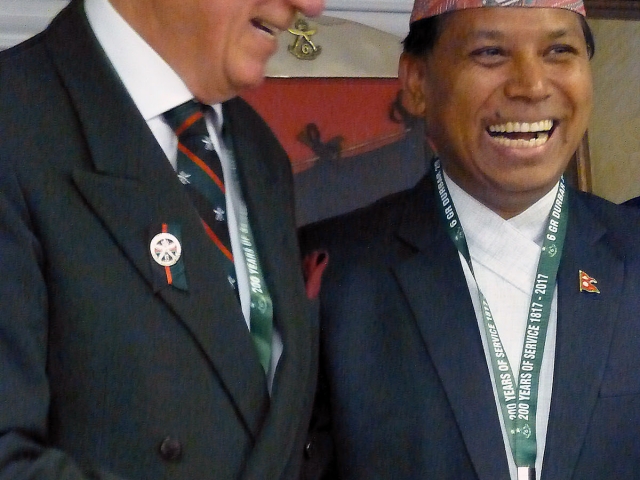 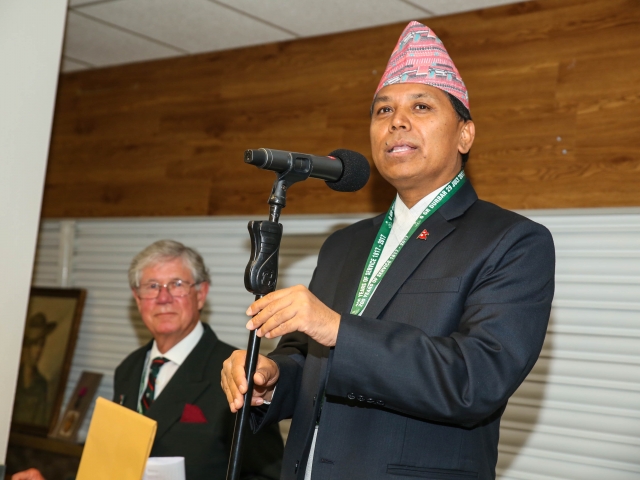 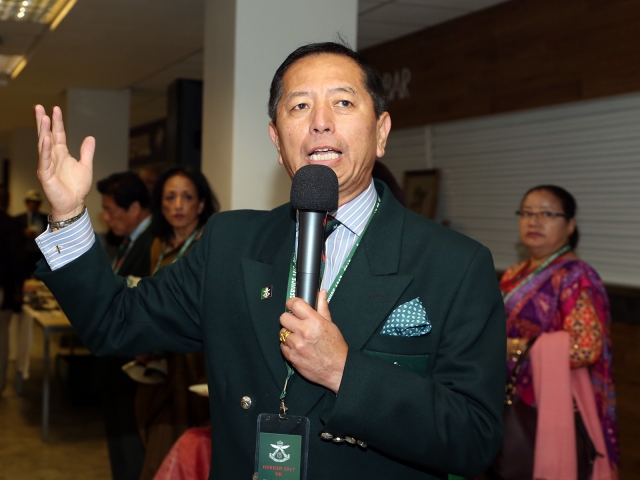 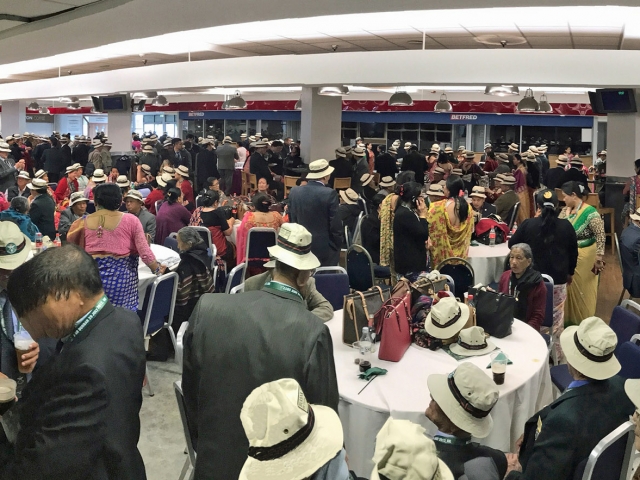 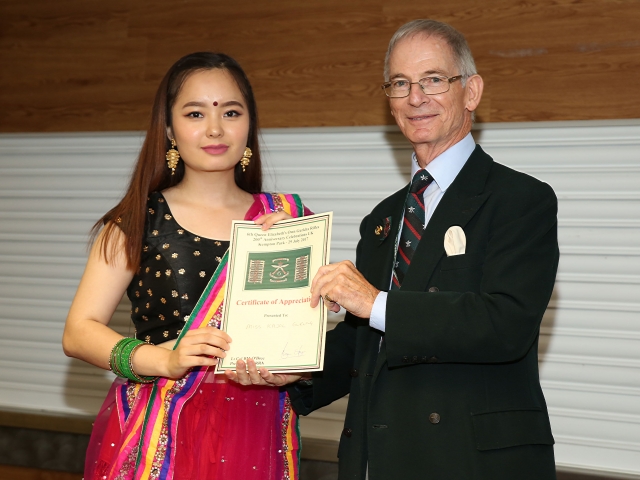 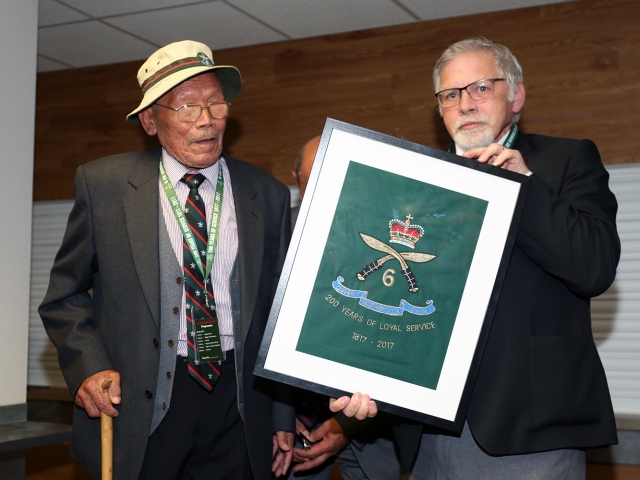 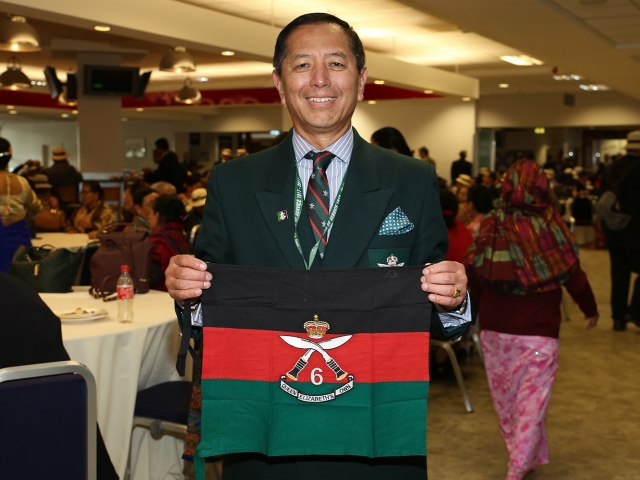 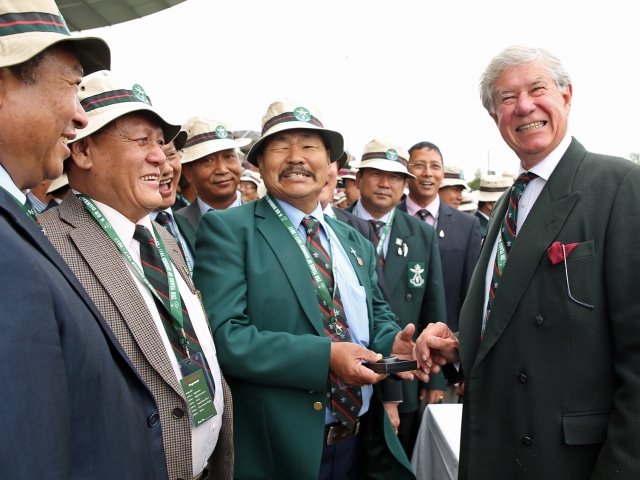 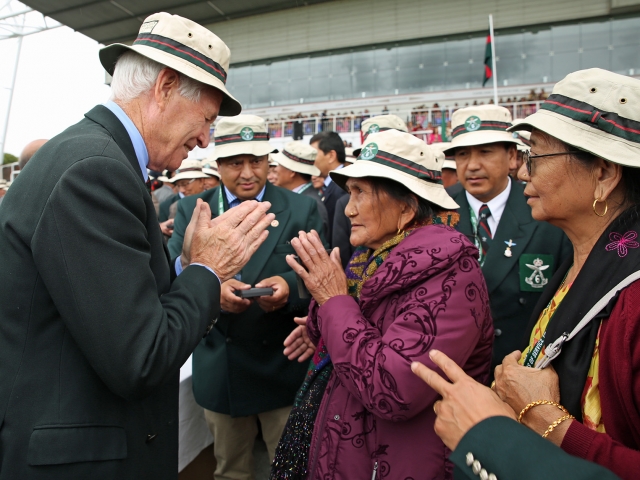 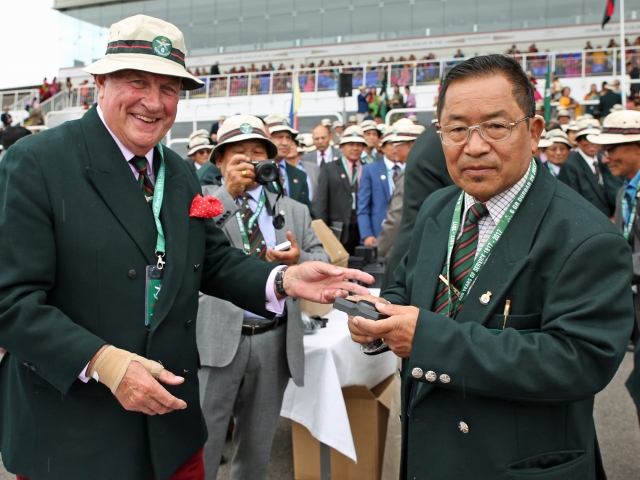 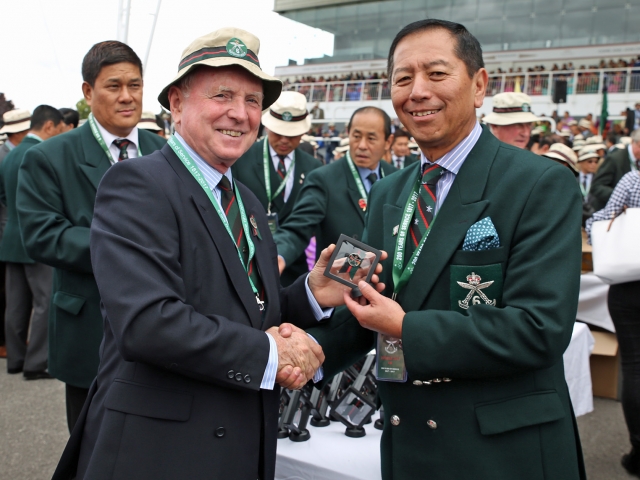 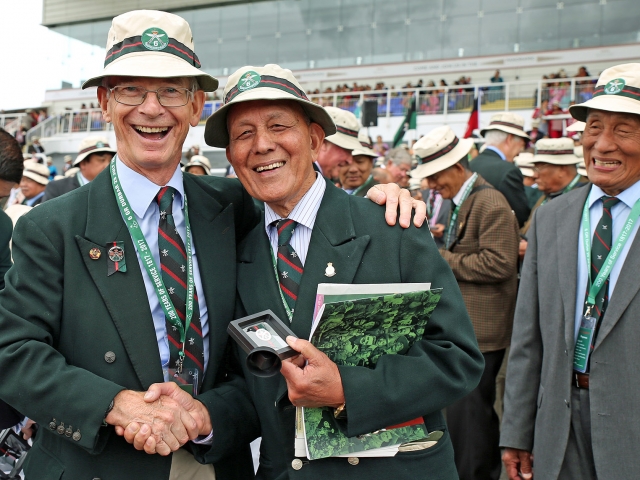 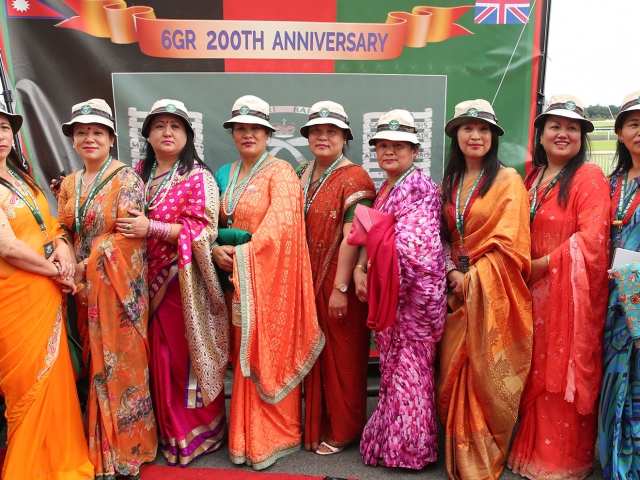 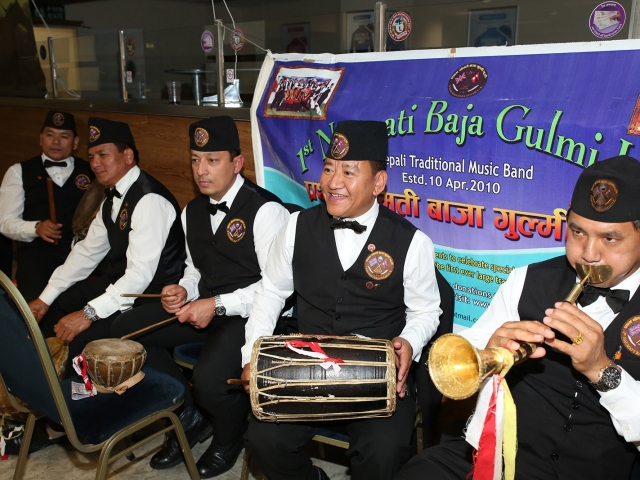 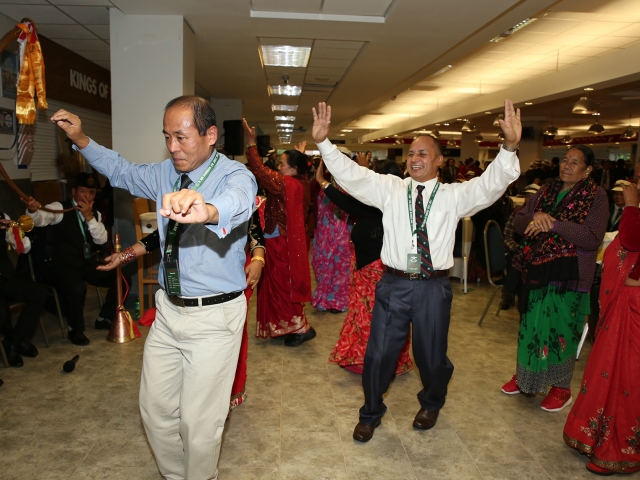 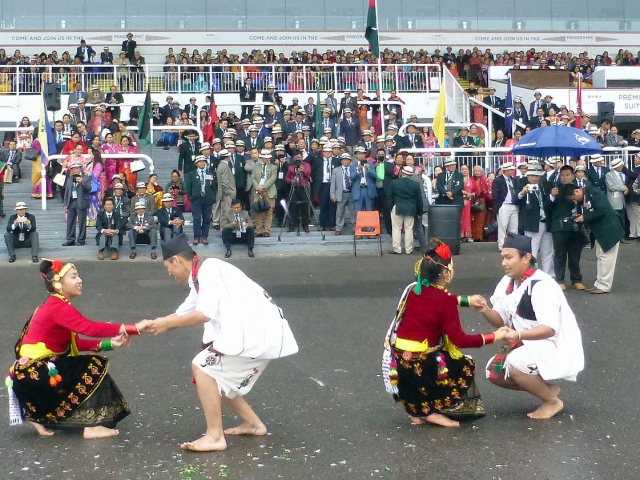 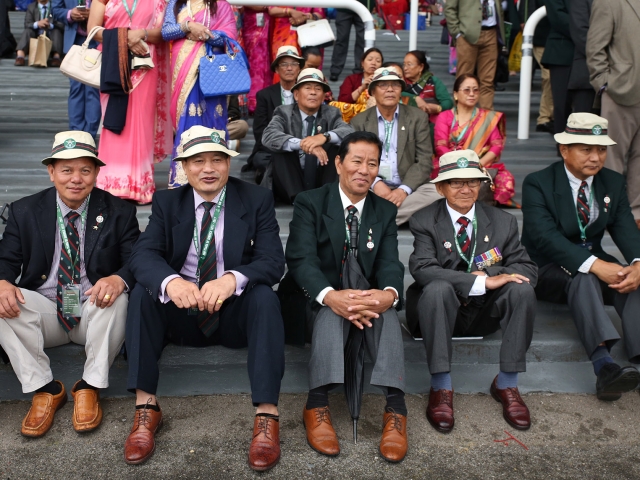 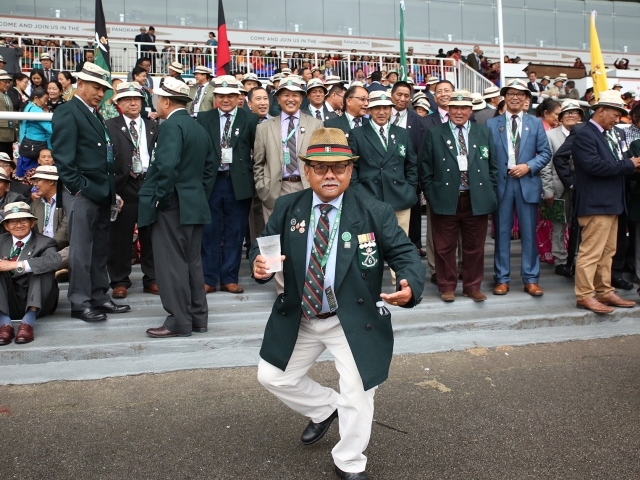 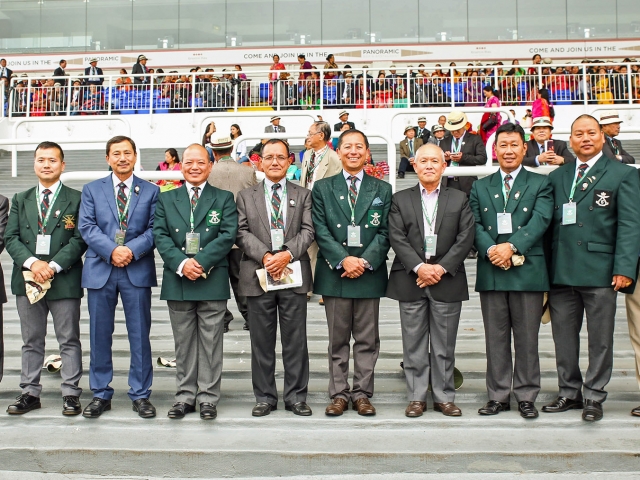 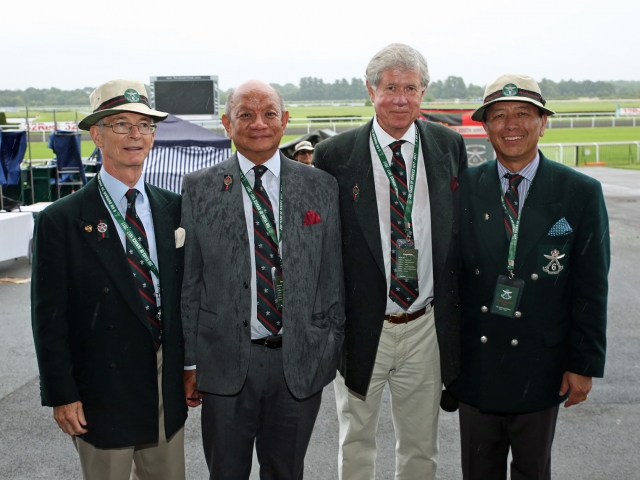