REORGANISATION AFTER THE INDIAN MUTINY

1857 and 1858 were, up until partition of India in 1947, the most traumatic years faced by the Army in India. The Indian Mutiny resulted in the soldiers of many regiments turning against their British Officers, often murdering them, and pillaging the area.

Whilst other loyal units were involved in bitter fighting, the Regiment spent the years of the Indian Mutiny relatively quietly garrisoning on the North East Frontier from Dibrugarh. It remained loyal and therefore retained its arms. In 1858 five Jemedars and three Sepoys received accelerated promotion and seven Subedars, two Jemedars, one Halvidar and one bugler were awarded the IOM for conspicuous loyalty in the face of efforts to subvert them by the Surang Rajah of Assam. The Commanding Officer received the thanks of the Government for his loyal services.

In 1858 and 1859 the Regiment was involved in putting down the Meyong Abor tribe. In 1860 khaki uniform was introduced for the first time and in 1861 Lt Col Hannay’s long tour of command ended when he died at Dibrugarh. That same year saw a total reorganisation of the Indian Army too; a number of regiments were removed from the order of battle and it became necessary to produce a sensible system of numbering those that remained.

It is of interest to note that the Army in India remained subdivided into the following three separate armies, called Presidency Armies, each with its own Commander-in-Chief:

By a General Order produced in May 1861 the 1st Assam Light Infantry ceased to be an irregular corps and was included in the Line as the 46th Bengal Native Infantry. Some six months later the purely Gurkha battalions were withdrawn from the Line and numbered separately from the 1st to the 5th. As the Regiment consisted of both Gurkhas and Indians at this time it became the 42nd Assam Regiment of Native Infantry (Light Infantry). As part of the reorganisation it was established with eight companies instead of ten, the total strength being seven British Officers, sixteen Native Officers and six hundred and ninety-six Rank and File.

In December 1865 the companies of the Regiment were reorganised by jhat (tribal groupings), four being manned by Gurkhas, two by Sikhs and two by Hindustanis (one of Hindus and one of Mussulmans). In 1871 the Regiment’s muskets were withdrawn and it was issued with the Long Enfield rifle.

It was during this period that Colours were presented to the Regiment. Records do not exist as to exactly when the presentation took place but it was probably between 1870 and 1880. The Colours ceased to be carried on ceremonial parades in 1891 when the Regiment became a rifle regiment, but recruits continued to be attested on the Colours and on their replacements until after the Second World War when these replacements became too fragile.

Circumstances, gave the Regiment, stationed in Dibrugarh, a relatively peaceful ten years between January 1861 and October 1871 to build up and reorganise itself after the turmoil of the Indian Mutiny. However, by 1871 there were signs of trouble in the Lushai Hills. 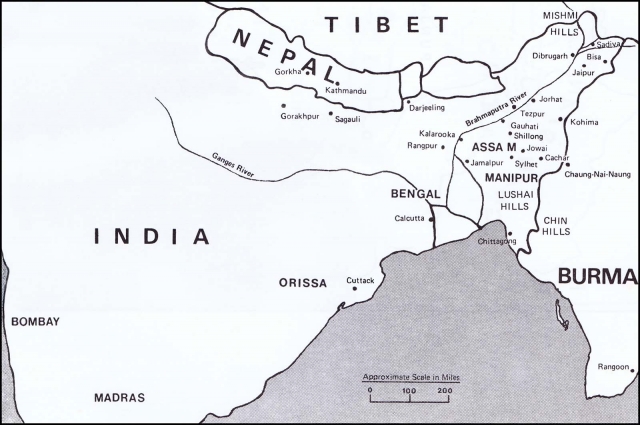 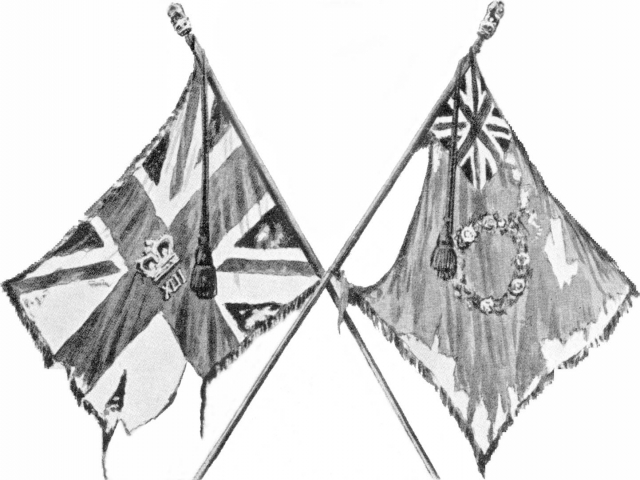