Medicina was a short, sharp battle that lasted but a few hours. It captured no great city, crossed no major obstacle, achieved no strategic objectives and made no great difference to the course of the war, which would in any case end a few weeks later. The battle honour was awarded to the only two regiments that had a presence – 14/20th King’s Hussars and 6th Gurkha Rifles – and, like most of the little battles of the latter stages of the Italian war, has been wiped from the nation’s collective memory, if it was ever there in the first place. Forgotten and of little global importance it may have been but it was a hard fought, vicious fight against the cream of the German army – and even with ultimate defeat staring him in the face the German was still a superb soldier – and it most certainly was important to those who were there.

Historians still argue as to the value of the Italian campaign. The last German stronghold in Tunisia surrendered on 13 May 1943. The North African campaign was over and for some time Allied planners had debated what to do next. The Americans wanted nothing that would distract from an invasion of North West Europe; the British knew that there were as yet insufficient landing craft and American troops in England were not to invade for at least a year. Churchill had always been a seeker after the easy option – what he called the ‘soft under belly’ – and it was he who persuaded the Americans, against their better judgement, to agree to an invasion of Italy. This would drive Italy out of the war, create another front which might make an invasion of fortress Europe unnecessary, draw German troops away from Russia and prevent the Russians from finishing the war in possession of the Balkans. The Russians were told about drawing German troops away from them; they were not told about British concerns about communism in the Balkans. In the event, apart from knocking Italy out of the war, which would have happened anyway without a landing there, the campaign achieved none of its aims. It did not make Overlord unnecessary, it tied down 18 Allied divisions facing the same number of Germans, and the Russians did end up in control of the Balkans. All that said, in 1943 only the Red Army was fighting the Germans, and the only theatre where Allied land forces could engage them was in Italy. Pressure to do something was very great, and if the troops and the assets were available, then why not have a go?

On 10 July 1943, the Allies invaded Sicily. On 3 September, British and American troops landed in Italy and on 8 September Italy surrendered. Now began a long, slow slog up the Italian peninsula (see Map 1), over ground that was easy to defend but very difficult to attack; movement was slow, and the whole campaign bore more relation to the First War than it did to the swift war of movement with lightning advances that the Allies had predicted and hoped for.

2/6th Gurkha Rifles took no part in the initial stages of the Italian campaign. The Battalion had given up its horses and mules to become motorised in 1940, and moved from India to the Middle East in August 1941 where it was briefly employed in the Anglo-Russian operation to secure the land link to Russia through Iran, and then in the boring but necessary defence of the oil fields of Iraq. In February 1943 the Battalion was moved to Shaiba to join 3rd Indian Motor Brigade as it changed its name to 43rd Indian Infantry Brigade (Lorried) in 31 Indian Armoured Division. The Brigade, soon to redesignated yet again as 43rd Gurkha Lorried Brigade, consisted of 2/6 GR, 2/8 GR and 2/10 GR. 23rd Field Regt RA was the Brigade’s artillery regiment with 60 Battery supporting 2/6GR, an affiliation that was to continue to the war’s end. Often too 14/20th King’s Hussars would support the Brigade, although the affiliation with 2/6 GR would not become permanent until arrival in Italy.

Trained as it was in mobile operations the Brigade would have been very useful had such operations been in prospect, but by the summer of 1943 it had become clear that the Italian operation was in danger of being bogged down and that there was insufficient infantry to support the armoured divisions trying to battle their way up an inhospitable landscape. Hence 43rd Gurkha Lorried Brigade moved to Italy in August 1943 and, as an independent brigade group, found itself serving a variety of masters. Initially under command 1 Armoured Division, then in rapid succession 10 Indian Division, 56 Infantry Division and 2 New Zealand Division, for most of this time the soubriquet ‘Lorried’ was a misnomer. What was needed – and what Gurkhas were and are very good at – was good old fashioned foot borne infantry soldiering, attacking along mule tracks and across rivers, often at night, usually in the mountains and rarely anywhere near their lorries. By April 1945, however, the Allies had crossed the mountains and were now poised to advance into the valley of the River Po, flat land criss-crossed by rivers and canals (see Photograph 1) and dotted with small towns and hamlets that made a defender’s dream (see Map 2). For the attacker though, mobility might now return and 2/6 GR were issued with Kangaroos, improvised armoured personnel carriers and the British Army’s first attempt at providing a vehicle that could give both cross country mobility and protection to the infantry, while allowing them to move across the battlefield at the same speed as the tanks. It was something that the German army had done with its panzer grenadier regiments since before the war, and a concept that would take the British Army another forty years to get (more or less) right.

Originally a Canadian idea, the Kangaroo was a Sherman tank with the gun turret removed or a Priest self-propelled gun with the gun and ammunition racks taken out and armour plate welded over the gun embrasure. Both types had a crew of two and could carry ten infantrymen (Sherman version) and twenty in the Priest variant. In the case of 2/6 GR their Kangaroos were converted Shermans and the crews, driver and machine gunner, were provided by 14/20th King’s Hussars. As that regiment also supplied the tanks to support 2/6 GR a very close and genuine relationship – friendship even – grew up between the two regiments.

The Allied Spring offensive began on 9 April 1945. The Germans were on the run but they had no intention of giving up any ground without a fight. The canals and rivers provided natural tank obstacles which could be held by a machine gun and section of infantry long enough to force the attacker to deploy before falling back to the next obstacle. In this advance 43rd Gurkha Brigade were under command of yet another superior headquarters, II Polish Corps this time, and designated Northern Mobile Pursuit Force. The Brigade’s immediate task was to establish bridge heads over the rivers to allow II Polish Corps to advance. On 14 April it was clear that if the Corps was to get across the River Sillaro then its right flank must be protected to prevent a German counter attack from the Medicina area. 43rd Gurkha Brigade was ordered to advance along the line Speranza cross roads – Marochia – Medicina. The area was defended by men of the German 4th Parachute Division, experienced, well trained, well led and in no mood to roll over and die, whatever the overall situation might be. The only way for the Brigade to take its objectives in the time frame required would be to act speedily, get the enemy on the back foot and bounce him out of his defensive positions.

43rd Gurkha Brigade at this stage was a lot larger than a standard brigade. As well as its three Gurkha battalions, it had under command 2nd Royal Tank Regiment (2 RTR), 14/20th King’s Hussars (14/20 KH), 23rd Field Regiment, R Battery 15 Field Regiment, 106 Battery 78th Medium Regiment, one battery 7 Polish Anti-Tank Regiment, two troops 3 Field Squadron RE and 255 Armoured Field Company RE. It had been commanded since its formation by Brigadier ‘Tochi’ Barker, late of the 2nd Gurkha Rifles.

On 13 April, the Brigade crossed the Santerno River by Bailey bridge erected by the engineers and by last light after numerous skirmishes with retiring defenders they reached La Ringhera. By first light on 15 April, the Brigade was poised to cross the River Sillaro, stoutly defended by men who well knew the tactical significance of the obstacle. At 1115 hours on 15 April, 2/10 GR tried to establish a bridge head on the northern bank, but while they initially succeeded in getting across the river they could not hold in the face of determined German infantry and fire from medium and heavy mortars. In the small hours of 16 April, they tried again and this time they did succeed in establishing a precarious lodgement, closing up to Cesarina by 0430 hours, while 2/8 GR, riding on 2 RTR tanks, reached Formasaccia. By 0700 hours, the engineers had got a bridge across the river and now it was the turn of 2/6 GR. With the Kangaroo borne B Company having a squadron of 14/20 KH in the lead the battalion group pressed on. Around 1300 hours, at Madonna del Silvaro they were held up by two German self-propelled guns (probably 88mm anti tank guns) but these were disposed of and at 1500 hours C Company passed though A and hit the outskirts of Medicina at 1700 hours, just as it was getting dark.

Medicina was, and is, a small medieval town with narrow streets and cellared houses, posing all the problems that operations in built-up areas bring. Fighting from building to building, dismounted from their Kangaroos, the Gurkhas fought their way into the town (see Picture 1), ably supported by the 14/20 KH tanks which could blow holes in walls with their 75mm guns to allow the infantry to get in. Fighting in close quarters is always bloody and kukris and bayonets were used to good effect where ranges were too short for rifle fire. By 1800 the rest of the battalion group was in the town and by 2100 hours Medicina was secure. The next morning was spent in mopping up. Now the Polish Corps was across the Sillaro, its flanks secure. 43rd Gurkha Brigade reverted to under command 2 New Zealand Division and the advance went on. In the battle of Medicina seventy German prisoners were taken as well as numerous artillery pieces at least one tank (reported as a Mark V Tiger, it was probably an enhanced Mark IV). The German dead are unknown but it cannot have been less than a hundred. Allied casualties were slight, but included seven men including a warrant officer killed in 14/20 KH and a GOR run over by a Kangaroo and another killed in a Kangaroo that turned over.

In the Officers Mess of the Royal Gurkha Rifles, successor to 6 GR, hangs a painting of the Battle of Medicina. It shows Subedar Raghu Gurung taking out the crew of a German anti-tank gun with his kukri; just behind him is a tank of 14/20 KH (see Picture 2). It was a joint victory and that it is forgotten by history cannot detract from the gallantry and determination shown by the men of those two regiments, whose friendship endures to this day. 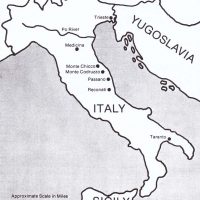 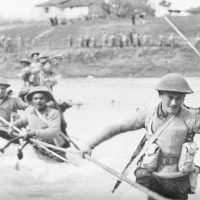 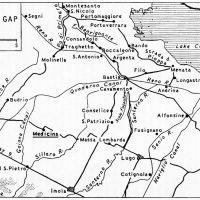 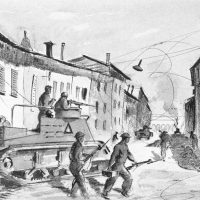