For some years the Lushai clans had been raiding villages in the British territory. By 1871 these raids had become so frequent that a punitive expedition was mounted. Two columns were formed, the first at Chacar and the second at Chittagong. The Regiment, with a strength of 6 British Officers and over 500 men, embarked in a ship at Dibrugarh in October 1871 and sailed down the Brahmaputra River to Kalarooka. It then marched to Cachar, via Sylhet. It is worth noting here that unless there was a convenient river or railway-line all troop movement was by foot, and great distances were often covered remarkably quickly. Such moves required considerable administrative planning and organisation.

By March 1872 the expedition was brought to a successful conclusion when the Lushai chief came to terms. A clasp to the Indian General Service Medal was awarded to all ranks in the Lushai Expedition. The Commanding Officer was made a CB and Subedar Major Runbahadur was awarded the OBI. From 1872 soldiers in Assam were paid 2.8 Rupees per month as a local allowance called ‘batta’. In November 1872 the Short Enfield rifle replaced the Long version, but this in turn was soon replaced by the Snider rifle.

In May 1873 Lieutenant Colonel J P Sheriff assumed command of the Regiment. He subsequently became a Lieutenant General and was the first Colonel of the Regiment from 1904 to 1911. In April 1874 the 42nd Assam Light Infantry moved from Dibrugarh to Gauhati, and from there on to Shillong in November. During the period 1875 to 1880 the Regiment was heavily involved in a series of actions against the Nagas which were marked by the award of the clasp ‘NAGA 1879-80’ to the Indian General Service Medal. In November 1878 Subedar Major Runbahadur retired after forty-five years service.

In 1880 the Regiment moved from Shillong to Kohima and in 1882 it moved back to its old home of Dibrugarh. In 1884 it was issued with two steel 7 pounder mountain guns which were carried by porters when being deployed. Facsimiles of these weapons (known as Bubble and Squeak) were held by the Regiment up to the formation of the Royal Gurkha Rifles in 1994 where they now reside.

January 1885 marked another change of name when the Regiment became the 42nd Bengal Infantry. In April of the same year all soldiers who were not Gurkhas were transferred to other regiments. Then, as a purely Gurkha regiment, its name was changed in June 1886 to the 42nd Gurkha Light Infantry. Meanwhile it had, in February 1885, moved back once more to Shillong from where detachments were provided at Tezpur, Gauhati and Jowai. 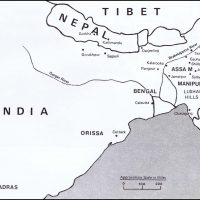 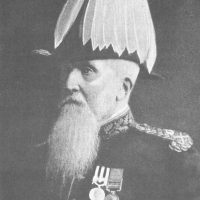 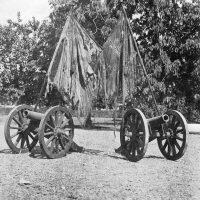