“I first met the 6th Gurkha Rifles in 1915 in Gallipoli. There I was so struck by their bearing in one of the most desperate battles in history that I resolved, should the opportunity come, to try to serve with them. Four years later it came, and I spent many of the happiest and, from a military point of view, the most valuable years of my life in the Regiment.”
Field Marshal Sir William Slim

“When everything comes out, this Dardanelles show will prove to have been the most mismanaged show on earth with thousands of lives that have been unnecessarily thrown away”
Lt Col Allanson, 6 GR

On April the 24th 1914 orders were received for the 1/6th Gurkha Rifles to embark at Port Said on s.s. Dunluce Castle for the Dardanelles (see Maps 1 and 2). The ship anchored off Sedd-al-Bahr at 1230 on April the 30th. The Battalion subsequently left Murdos for Alexandria on 21st December, and little did they know what was in store over the next 8 months in what became known as the Gallipoli campaign.

Overall the Gallipoli campaign was a disaster from beginning to end. The mission was ineptly commanded and poorly equipped. After nine months of deadlock and the loss of more than 100,000 lives the allies eventually withdrew their attack on the peninsula. The offensive’s ultimate aim was to push through the Dardanelles Straits and capture Constantinople, the Turkish capital. If a breakthrough had been achieved, the Turks, who were allied with the central powers (Austria and Germany), would have been unable to prevent Britain and France from joining the Russians in the war against Austria-Hungary and Turkey.

However, the 6th Gurkhas gained immortal fame at Gallipoli during the capture from the Turks of the feature later known as “Gurkha Bluff” and at “Sari Bair” they were the only troops in the whole campaign to reach and hold the crest line and look down on the Straits which was the ultimate objective.

Gurkha Bluff
The second despatch of General Sir Ian Hamilton, Commander-in-Chief of the Mediterranean Expeditionary Force, dealt with the Krithia battles of May and June 1915.

“During the night of the 10th/11th May the 6th Gurkhas started off to seize this bluff. Their scouts descended to the sea, worked their way for some distance through the broken ground along the shore and crawled hands and knees up the precipitous face of the cliff. On reaching the top they were heavily fired on. As a surprise the enterprise had failed, but as a reconnaissance it proved very useful. On the following day Major-General H. V. Cox, commanding 29th Indian Infantry Brigade, submitted proposals for a concerted attack on this bluff (now called Gurkha Bluff).

At 6.30 p.m. on the 12th May the Manchester Brigade and the 29th Divisional artillery opened fire on the Turkish trenches and, under cover of this fire, a double company of the 1/6th Gurkhas once more crept along the shore and assembled below the bluff. Then, the attention of the Turks being taken up with the bombardment, they swiftly scaled the cliffs and carried the work with a rush. The machine-gun section of the Gurkhas was hurried forward, and at 4.30 a.m. a second double company was pushed up to join the first. An hour later these two double companies extended and began to entrench to join up their new advanced left diagonally with the right of the trenches previously held by their battalion. At 6 a.m. a third double company advanced across the open from their former front line of trenches under a heavy rifle and machine-gun fire, and established themselves on this diagonal line between the main ravine on their right and the newly captured redoubt. The 4th double company moved up as a support, and held the former firing line. Our left flank, which had been firmly held up against all attempts on the 6th-8th, was now, by stratagem, advanced nearly 500 yards. Purchased as it was with comparatively slight losses (21 killed, 92 wounded) this success was due to careful preparation and organisation by Major-General H. V. Cox, commanding 29th Indian Infantry Brigade, Lieutenant-Colonel Hon. C. G. Bruce, commanding 1/6th Gurkhas (see Photograph 1), and Major (temporary Lieutenant-Colonel) F. A. Wynter, R.G.A., commanding the Artillery Group supporting the attack. The co-operation of the two cruisers was excellent, and affords another instance of the admirable support by the Navy to our troops.”

“In order to mark the good work done by the 1/6th Gurkha Rifles in capturing the Bluff on the coast west of Krithia. The General Officer commanding has ordered that this Bluff will in future be known as”Gurkha Bluff” (see Photograph 2).

The Krithia battles were most significant as they proved that the original British assumption of a swift victory over an indifferent enemy was grossly mistaken. Thereafter Helles would become the scene of numerous attrition battles and success would be measured by an advance of a hundred yards or the capture of a trench.

The total battle casualties sustained by the 1/6th in the Cape Helles battles were 96 killed and 383 wounded. Capt F. B. Abbot and Capt D. G. J. Ryan were awarded DSOs and Lt H. C. Poynder the MC.

“General Baldwin’s column had assembled in the Chailak Dere on 6th of August, and was moving up towards General Johnstone’s headquarters. Our plan contemplated the massing of this column immediately behind the trenches held by the New Zealand Infantry Brigade. Thence it was intended to launch the battalions in successive lines, keeping them as much as possible on the high ground. Infinite trouble had been taken to ensure that the narrow track should be kept clear, guides also were provided; but in spite of all precautions the darkness, the rough scrub-covered country, its sheer steepness, so delayed the column that they were unable to take full advantage of the configuration of the ground, and, inclining to the left, did not reach the line of the Farm – Chunuk Bair till 5.15 a.m.

But now, under that fine leader, Major C. G. L. Allanson (see Photograph 3), the 6th Gurkhas pressed up the slopes of Sari Bair (see Map 3), crowned the heights of the col between Chunuk Bair and Hill Q, viewed far beneath them the waters of the Hellespont, viewed the Asiatic shores along which motor transport was bringing supplies to the lighters.”

In Allanson’s own words “At the top we met the Turks; Le Marchand went down, a bayonet through the heart. I got one through the leg, and then, for about ten minutes, we fought hand to hand, we bit and fisted, and used rifles and pistols as clubs; blood was flying like spray from a hair wash bottle. And the Turks turned and fled, and I felt a very proud man; the key of the whole peninsula was ours, and our losses had not been so very great for such a result. Below I saw the Straits, motors and wheeled transport, on the roads leading to Achi Baba”

To continue with General Hamilton’s despatch:

“Not only did this battalion, as well as some of the 6th South Lancashire Regiment, reach the crest, but they began to attack down the far side of it, firing as they went at the fast retreating enemy. But the fortune of war was against us. At this supreme moment Baldwin’s column was still a long way from our trenches on the crest of Chunuk Bair, whence they should even now have been sweeping out towards Q along the whole ridge of the mountain. And instead of Baldwin’s support came suddenly a salvo of heavy shells. These falling so unexpectedly among the stormers threw them into terrible confusion. The Turkish commander saw his chance; instantly his troops were rallied and brought back in a counter-charge, and the South Lancashire’s and Gurkhas, who had seen the promised land and had seemed for a moment to have held victory in their grasp, were forced backwards over the crest and on to the lower slopes whence they had first started.”

Every British officer in the 1/6th had been killed or wounded, except for the Medical Officer Capt Phipson, and the withdrawal was carried out by Subedar-Major Gambirsing Pun, who spoke no English, and relied on Capt Phipson (see Photograph 4) to interpret for him. The Battalion withdrew in good order and Gambirsing was awarded the MC for his leadership and gallantry. Total casualties amounted to 204 all ranks in three days fighting, of whom 45 were killed, three of them British officers. Allanson and Phipson were awarded the DSO, and of the many Battle Honours awarded to 6GR “Sari Bair” must rank as outstanding.

In Allanson’s own words “And so ended the great battle of Chunuk Bair; we had held victory in our grasp, and had the whole operation been a success, nothing would have been too good for us; as it was we must suffer with the failure; it is galling to think of how many of one’s own battalion are no longer alive, through whose example and death we gained the objective, only to be given up because others could not reach us or support us. To one alive “a crowded hour of glorious life is better than an age without name”, but I left that battlefield a changed man; all my ambitions to be a successful soldier have gone; knowing all I know now, I feel the responsibility. The murderous responsibility, that rests on the shoulders of an inefficient soldier or one who has passed his prime to command.”

From August the 28th to September 10th the 1/6th were engaged in the usual routine of trench warfare (see Photograph 5) but, after a spell of 34 days fighting, were relieved by the 19th Australian Infantry Battalion and sent into reserve.

On 12 December Battalion commanders were told in great secrecy that it was intended to evacuate the Anzac and Suvla areas of the Peninsula. At 4pm on the 21st the 1/6th left Murdos on s.s Knight Templar and arrived in Alexandria on Christmas Eve.

Post Script
It was the considered opinion of the Lt Gen Sir Reginald Savory, who served at Gallipoli with the 14th KGO Sikhs that the 1/6th Gurkha Rifles were “the outstanding battalion of the Gallipoli Campaign”.

General Sir Ian Hamilton’s secretary, in a letter acknowledging a Christmas card from the Regiment, says “It is Sir Ian Hamilton’s most cherished conviction that if he had been given more Gurkhas at the Dardanelles he would never had been held up by the Turks”. He was probably right!

Today a painting by Terence Cuneo showing Major Allanson and the 1/6th on the crest of Sari Bair is displayed by the Royal Gurkha Rifles, successors to 6 GR (see Picture 1). 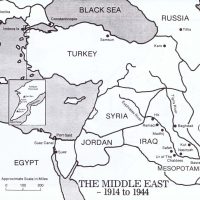 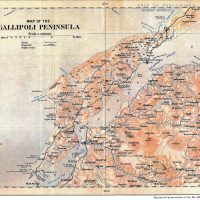 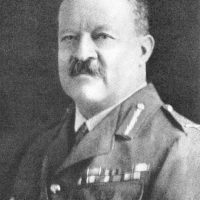 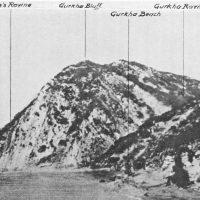 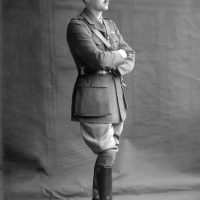 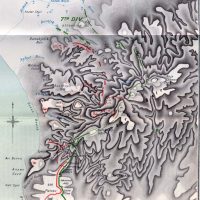 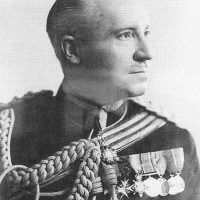 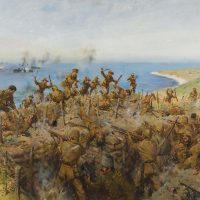