ORIGINS OF THE REGIMENT

On 16 May 1817, as a result of unrest in the Cuttack area of Orissa State (some two hundred miles to the south west of Calcutta), the East India Company authorised the formation of a ‘local corps’ to keep order in the area. This corps was known as the Cuttack Legion. It is from the Cuttack Legion that the 6th Queen Elizabeth’s Own Gurkha Rifles traces its origins.

Captain Simon Fraser was appointed to raise and command the Cuttack Legion which consisted of two troops of light cavalry, an artillery detachment and three companies of infantry. The total strength was ten British Officers and six hundred and fifty-six Indians. Two hundred and thirty-two ponies were made available to the cavalry and officers. The main weapons were curved sabres for the cavalry, two 3 pounder ‘galloper’ guns for the artillery and muskets with a range of one hundred yards for the infantry. In 1819 a further company of infantry was raised.

The Cuttack Legion was involved in operations against the local tribesmen in 1819 and 1820. In late 1822 it left Cuttack and marched by stages to Jamalpur on the Brahmaputra River, finally reaching there in early 1823. Later that year the first two of many changes of name occurred and the Regiment first became the Rangpur Local Battalion and subsequently the 8th Rangpur Light Infantry. Together with these changes of name the Regiment was reorganised into eight companies of light infantry and two rifle companies. Two 6 pounder guns were issued for artillery support. The total strength was now six British Officers and nine hundred and ninety-three Indians.

The First Burma War broke out in 1823 when the Burmese invaded India from Manipur and Chittagong. The Regiment, which was employed on the North East Frontier with Burma, gained its first experience of the Assam area where it was to serve on many occasions during its early years. Fighting continued until early 1826 when the enemy sued for peace. To commemorate this war a medal was struck by the East India Company and the Battle Honour ‘ASSAM’ was authorised for the regiments engaged. For some unexplained reason the Regiment has never carried the Battle Honour. 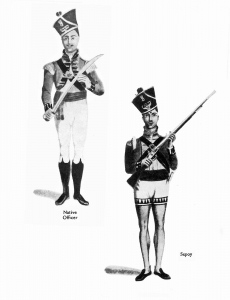