On the morning of 23rd June 2021 at Platform 1 of Paddington Station there was an unusually large gathering, none of whom were passengers. They included invited guests, a number of Gurkha and other well-wishers, staff of Great Western Railway (GWR) and quite a gang of press and media, including BBC and ITV. All were present to witness the unveiling of the latest of GWR’s train to be named.

To commemorate the 75th Anniversary of the end of World War 2 GWR planned a series of train namings to represent the armed forces, intelligence services and Secret Service as well as politics. This was to coincide with events around VE75 and VJ75 days.

Among the small number selected were: Harry Billinge, a sapper and D-Day survivor who landed in the first wave on the beaches in Normandy; George Sheard, a Royal Marine commando ‘Cockleshell Hero’ who was one of only two to survive the famous raid in Bordeaux Harbour in 1942; Odette Hallowes, the most well-known member of the SOE in France and most highly decorated spy of the war; Wing Commander Ken Rees, a bomber command pilot shot down over Norway who took part in the ‘Great Escape’ from Stalag Luft III, made famous by the film in which Steve McQueen’s character is said to be based on Ken; and yet to be formally named are Alan Turing and Sir Winston Churchill.

To represent those who fought in Burma, GWR looked for a recently identifiable Burma ‘hero’. Tulbahadur’s name came up both as a VC winner and for having been in the public eye in 2007 during his support for Joanna Lumley’s campaign for the right of Gurkhas to settle in the UK. The arrival of Covid and resulting restrictions in 2020 delayed the naming programme. 23 June 2021, 77 years to the day since Tulbahadur’s VC action at Mogaung could not have been a more fitting alternative.

After speeches and a reading of the VC citation, Arjun and Megh Kumari were invited to unveil the train’s name, assisted by Joanna. The name and surrounding motif included 126 small kukris in memory of those of the 3rd 6th who lost their lives during the Burma campaign — one with a small VC recognised Captain Michael Allmand’s gallantry at Mogaung and posthumous award of the VC.

On behalf of 6GRRA, Duncan Briggs presented Megh Kumari and Arjun with copies of our 200th Anniversary brochure and in addition to Megh Kumari a copy of the 1991 photo taken with her and her father with guests and Gurkha Officers during their visit to the Regiment in Hong Kong on the occasion of the presentation of the Michael Allmand’s VC to the Regiment. A hard-backed copy of the 200th Anniversary brochure was also presented by our Chairman to Ruth Busby, HR Director of GWR, who headed their team. The inscription, kindly prepared by Mani, read:

It was a proud day for Gurkhas as a whole; all the more so for those of us who served as 6th Gurkhas.

The tradition of naming trains in the UK is as old as the railways going back to the 1820s and George Stephenson’s Rocket. This followed the convention of naming ships and gave an extra sense of character to the technology. Catching the ‘Flying Scotsman’ sounds more of an event than the ‘11.37’ from King’s Cross. I wonder who might be the first Association member to travel on the ‘Tulbahadur Pun VC’ train? 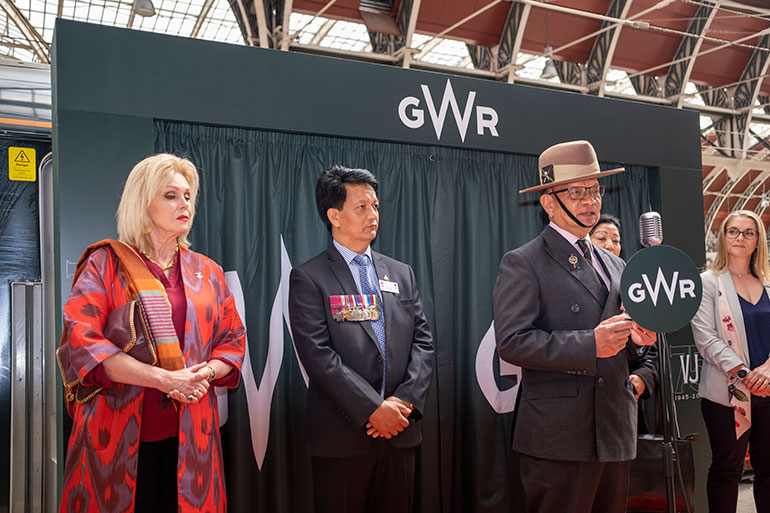 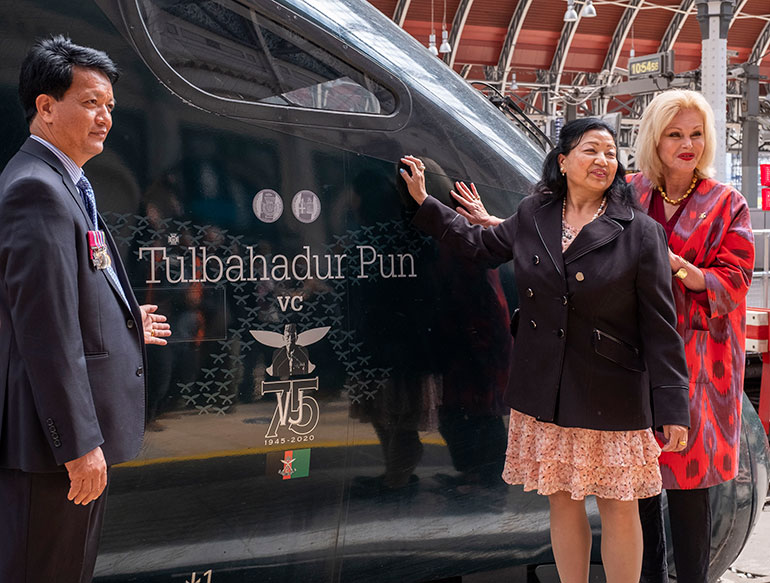 Arjun, Megh Kumari and Joanna after the unveiling 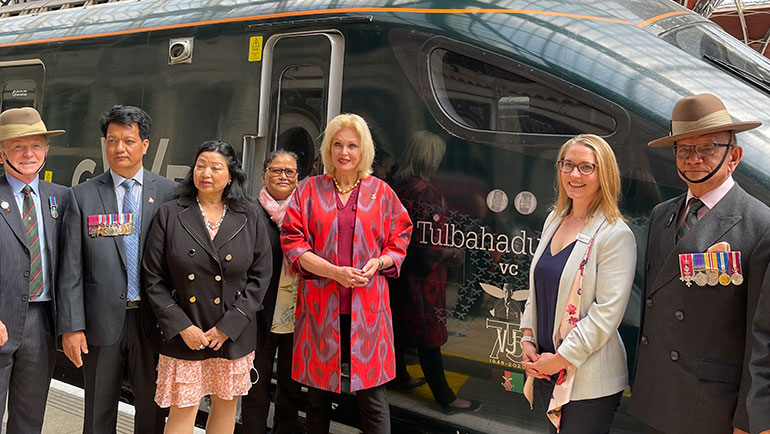 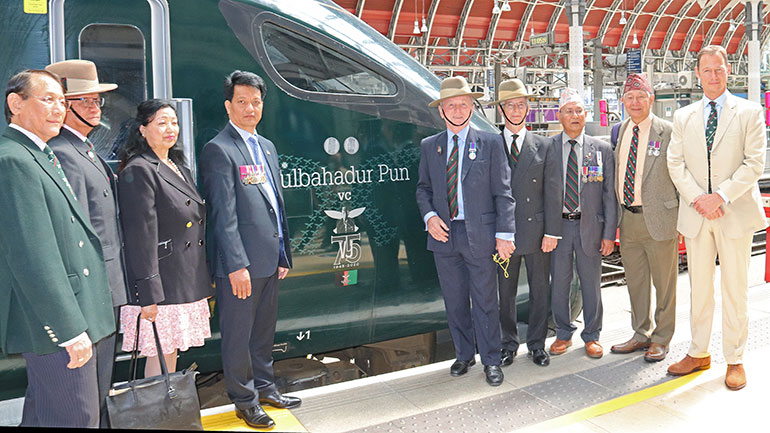 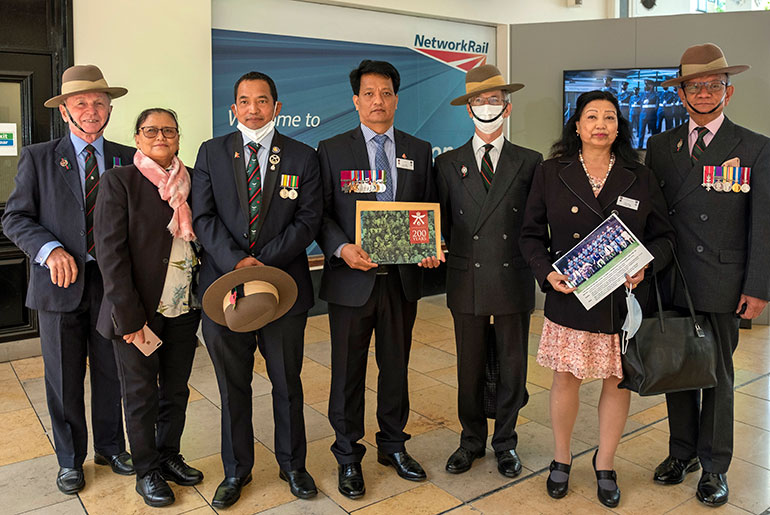 Presentation of our 200th brochure and 1991 photo to Arjun and Megh Kumari, supported by two family friends 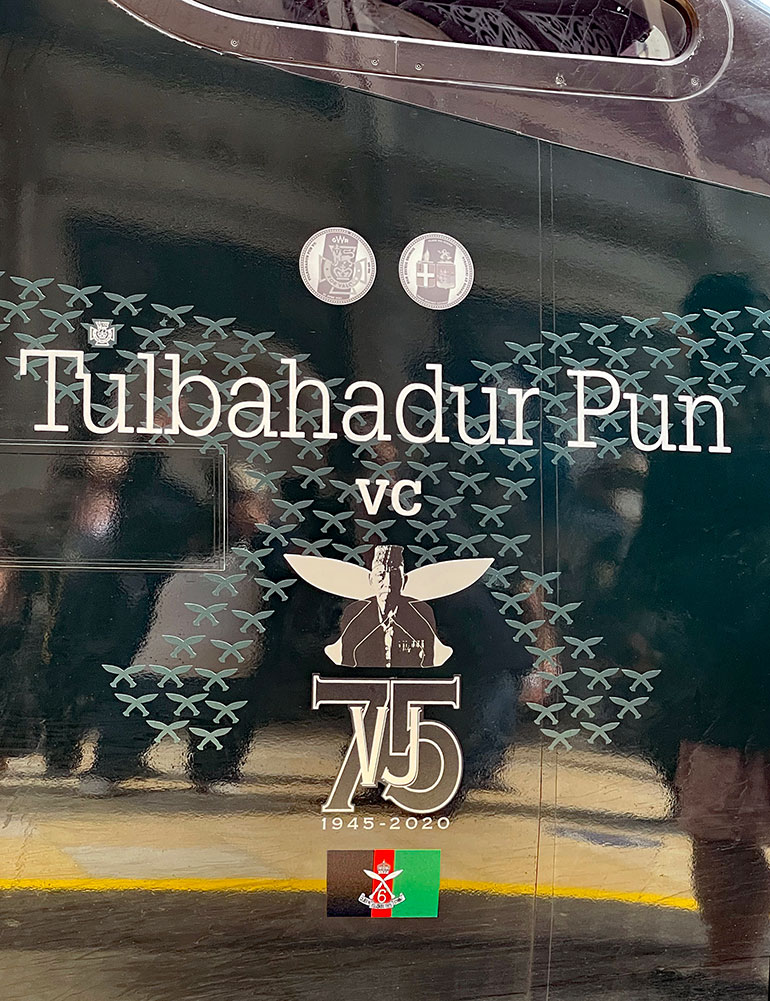