Well; we were really lucky with the weather, Sunday November 10 dawned fine and even sunny. The walk down to Horse Guards through Green Park was lovely and then onto the parade square to try to find the Gurkha Brigade group. I found the BGWS group led by Major Tikendra and stopped for a chat before locating the Hats Felt Gurkhas across the square. 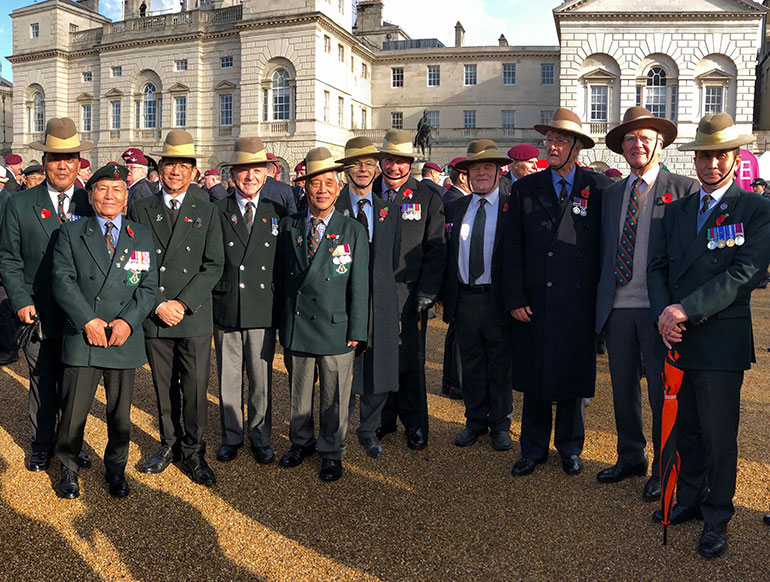 It was a great turnout from the Brigade and from 6GR. Sadly, we were without stalwarts such as Jon Titley, John Conlin and Julian White, but with a turnout of 12 the rest of us more than made up for it. Interestingly we had two ladies in the GBA group, Maxine Cook, wife of Nick Cook and Caroline Newton Dunn, widow of Charlie Newton Dunn; it was lovely to see them both.

The usual long wait finally saw us through the arch and onto Whitehall and still in the sun. Thankfully, this year we were close to a large screen so we could see the ceremony at the Cenotaph itself. We found ourselves waiting next to a Dutch contingent and a few words in Dutch quickly broke the ice. What an interesting group they were. There was a gentleman in a wheel chair who had fought in Indonesia during WWII and had been attending our Remembrance Parade for 35 years; plus many others with interesting stories.

We applauded the other groups as they went past, including our Gambahadur doing a great job at the head of the BLESMA contingent. Finally we were off. The march went well, if confusing at a slow pace and even slower tunes from the bands. Photographs done back on Horse Guards, we made our way to a church hall close by where GBA had laid on bhat and beer. It was really well organised; went really well and was much enjoyed by everyone. A big shyabash to GBA for the organisation and to those from 6GRRA who turned up.