At my last attendance of the annual GBA Dinner, Margaret Thatcher was prime minister, Sir John Chapple had just taken over as Chief of the General Staff, John Anderson was Commanding Officer and I was a subaltern based at Church Crookham. That was 31 years ago.

My abiding memory of that event was that the antecedent regiments, from the pre-partition Brigade, were there in force. Most could still muster a table of ten and I believe that the 5th Gurkhas had two tables that year. It is with great sadness, with the benefit of hindsight, that we didn’t get to spend more time conversing with them that evening as their associations would shortly come to a natural end.

This time on 7 November 2019 it was clear that we were now also representing a bygone era as those who had served in one of the Gurkha regiments before their amalgamation into the Royal Gurkha Rifles.

We only amassed one table of those who had served with the 6th Gurkha Rifles, but we typically punched above our weight in the jovial banter stakes (and waistlines had clearly increased over the years too) and Jeremy Brade had us laying wagers on the length of the after dinner speeches. We did lose the facial hair award to 7GR who resembled a collection of ageing hipsters from Shoreditch but maybe not that smart! John Anderson won the prize for the most sequential GBA dinners attended – over to twenty and counting. 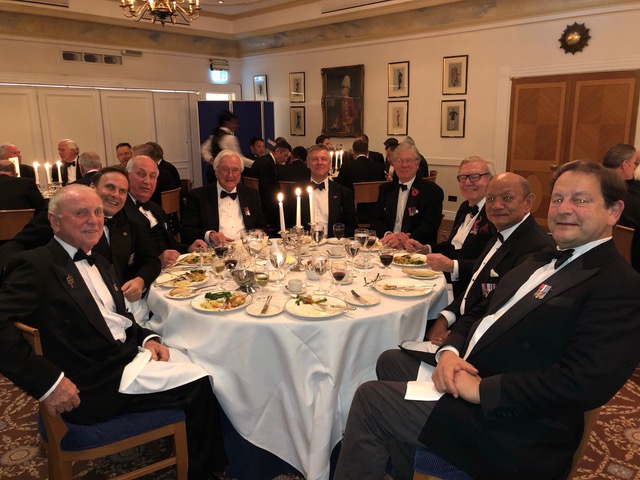 Not only had I been looking forward to catching up with Brigade friends, I was also extremely interested to attend the pre-dinner briefings from the new Colonel of the Brigade of Gurkhas, Jody Davies, and from Al Howard and the Gurkha Welfare Trust. Both proved fascinating. What was pleasing to see was that recruitment into the Brigade will increase in 2020 to a level not seen since 1988. The future is undoubtedly brighter than it has been for many years.

After dinner we adjourned to bars various to continue with the reminiscing and to meet some of the serving ‘youngsters’. I found it amusing when chatting with the Gurkha Major of 1RGR to find out that he had enlisted the year before I retired. How time marches on.

Last time the ‘sano sahebs’ moved on to Chelsea in search of the bright lights. Jeremy even found a wife that very evening. This time we drifted across St James’s Square to the In and Out to gate crash the Fleet Air Arm’s Taranto guest night. Needless to say, the Generals led the way. A big thank you to Mani Rai and Niall MacNaughton for all they did on the organisational front; it was an exceptionally good evening. Hopefully it won’t take three decades to make it to the next one.