In 1959, the 6th Gurkha Rifles was granted the title ‘Queen Elizabeth’s Own’. At the same time, 7th Gurkha Rifles were granted the title ‘Duke of Edinburgh’s Own’. On 10th June 1959, a party of officers, serving and retired, and men from both regiments had the honour of being received in Audience by Her Majesty The Queen and His Royal Highness the Duke of Edinburgh at Buckingham Palace to mark the granting of their Royal Titles.

A photograph of those attending this audience was taken at Buckingham Palace and a short article about the occasion was published in the 1960 Brigade Kukri magazine. The article was written by Captain Antony Wakeham of our 1st Battalion, at the time ADC to Major General the Brigade of Gurkhas, Major General Jim Robertson, late 6 GR. In 1962, General Jim succeeded Field Marshal the Lord Harding as Colonel of the Regiment. 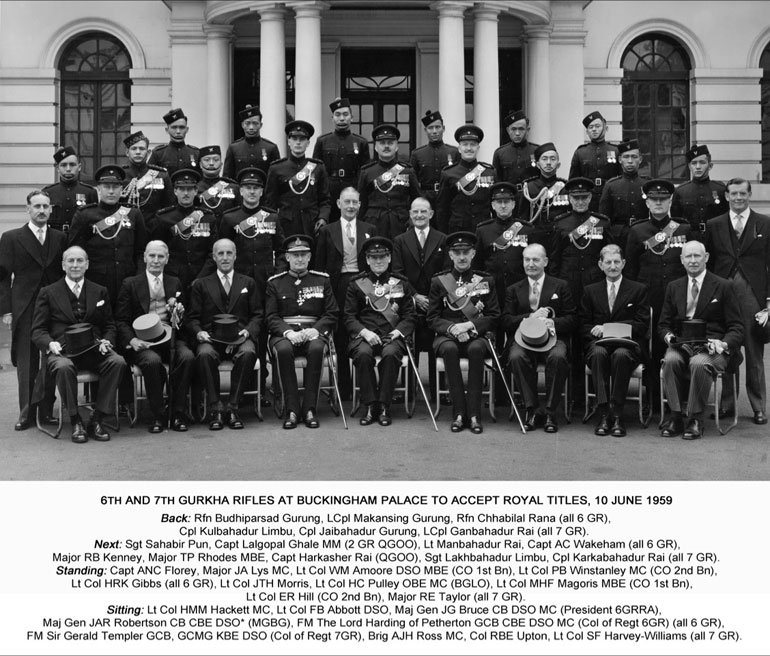 This year we will celebrate the 60th Anniversary of the granting of the Royal Title at our annual Reunion at the Gurkha Museum, Winchester on Saturday 16 November. Anthony Wakeham, the only surviving 6th Gurkha present at the 1959 Royal Audience, all being well, has agreed to join us at the Reunion.